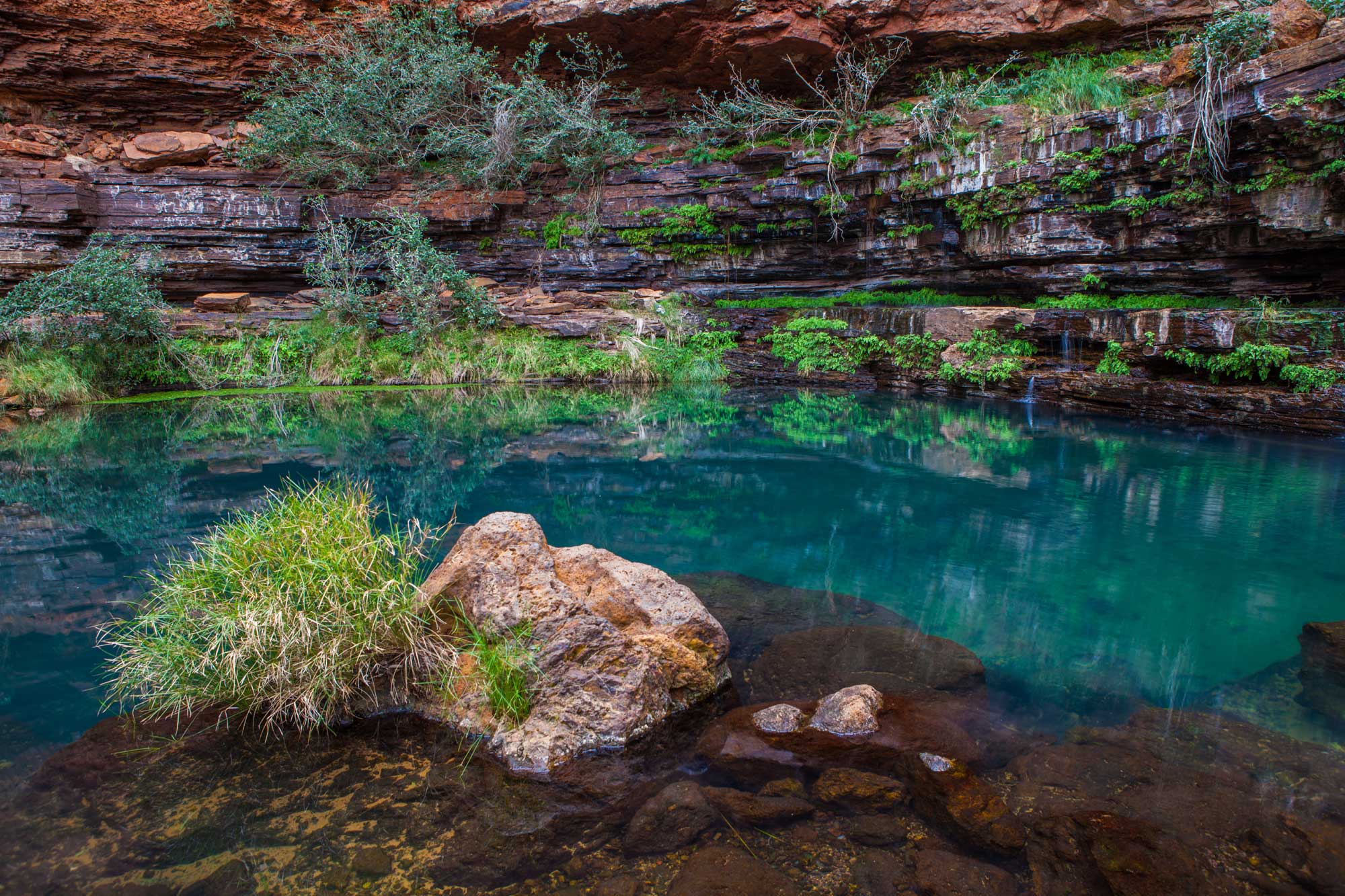 Situated in the dynamic Pilbara region of WA, the Karijini National Park is located approximately 1400km north of Perth and around 80km's north-east of Tom Price. Karijini (formerly Hamersley Range) National Park is the 2nd largest national park in WA and is ranked in the top 5 visitor experiences for the state.

Karijini National Park is an iconic, unspoiled nature-based destination offering a unique and diverse landscape and an unforgettable West Australian outback experience. Karijini is famous for its dramatic creeks, spectacular gorges and towering sheer sided chasms up to 100 metres deep.

A party led by explorer F.T. Gregory explored the area in 1861. He named the Hamersley Range, on which the park is centred, after his good friend Edward Hamersley.

Karijini National Park protects many different wildlife habitats, landscapes, plants and animals of the Pilbara. Wildflowers vary with the seasons. In the cooler months, the land is covered with yellow-flowering cassias and wattles, northern bluebells and purple mulla-mullas. After rain, many plants bloom profusely.

It is also home to a variety of birds, red kangaroos and euros, rock-wallabies, echidnas and several bat species. Geckos, goannas, dragons, legless lizards, pythons and other snakes are abundant. Huge termite mounds are a feature of the landscape and the rock piles of the rare pebble mound mouse may be found in spinifex country.

In the north of Karijini National Park, small creeks are hidden in the rolling hillsides - dry for most of the year - suddenly plunge into sheer-sided chasms up to 100 metres deep. These are the Park's famous gorges. They are spectacular but can be extremely dangerous. Further downstream the gorges widen and their sides change from sheer cliffs to steep slopes of loose rock.

Formation of the land

Rocks exposed at the gorges originated as fine-grained sediment which accumulated on an ancient sea floor 2,500 million years ago. At this time, the atmosphere contained much less oxygen and the only forms of life were simple bacteria and algae. Many of these sediments laid down in the oceans were rich in iron and silica.

Over hundreds of millions of years, the iron-rich deposits were transformed by the pressure of further sediments laid down over them, and they gradually turned into tough well-bedded rock. The gorges were eroded when a sharp drop in sea level caused the rivers to downcut rapidly - a process enhanced by the onset of a more arid climate, which depleted the protective vegetation cover on the valley sides.

In Dales Gorge, a stream, pools, waterfalls and ferns contrast with the red, terraced cliffs weathered by centuries of exposure. The occasional snappy gum can be seen perched on rocky ledges.  But every gorge is different, and each one is worth a visit. At Oxer Lookout, the junction of Weano, Red, Hancock and Joffre Gorges, tiers of banded rock tower over a pool at the bottom of the gorge. To explore these gorges you must be fit and prepared to submerge in near-freezing water, follow narrow paths and cling to rock ledges.

The Park is the traditional home of the Banyjima, Kurrama and Innawonga Aboriginal people. The Banyjima name for the Hamersley Range is Karijini. Evidence of their early occupation dates back more than 20,000 years. During that period, Aboriginal land management practices such as 'firestick farming', resulting in a diversity of vegetation types and stages of succession, have helped determine the nature of the plants and animals found in the park today. 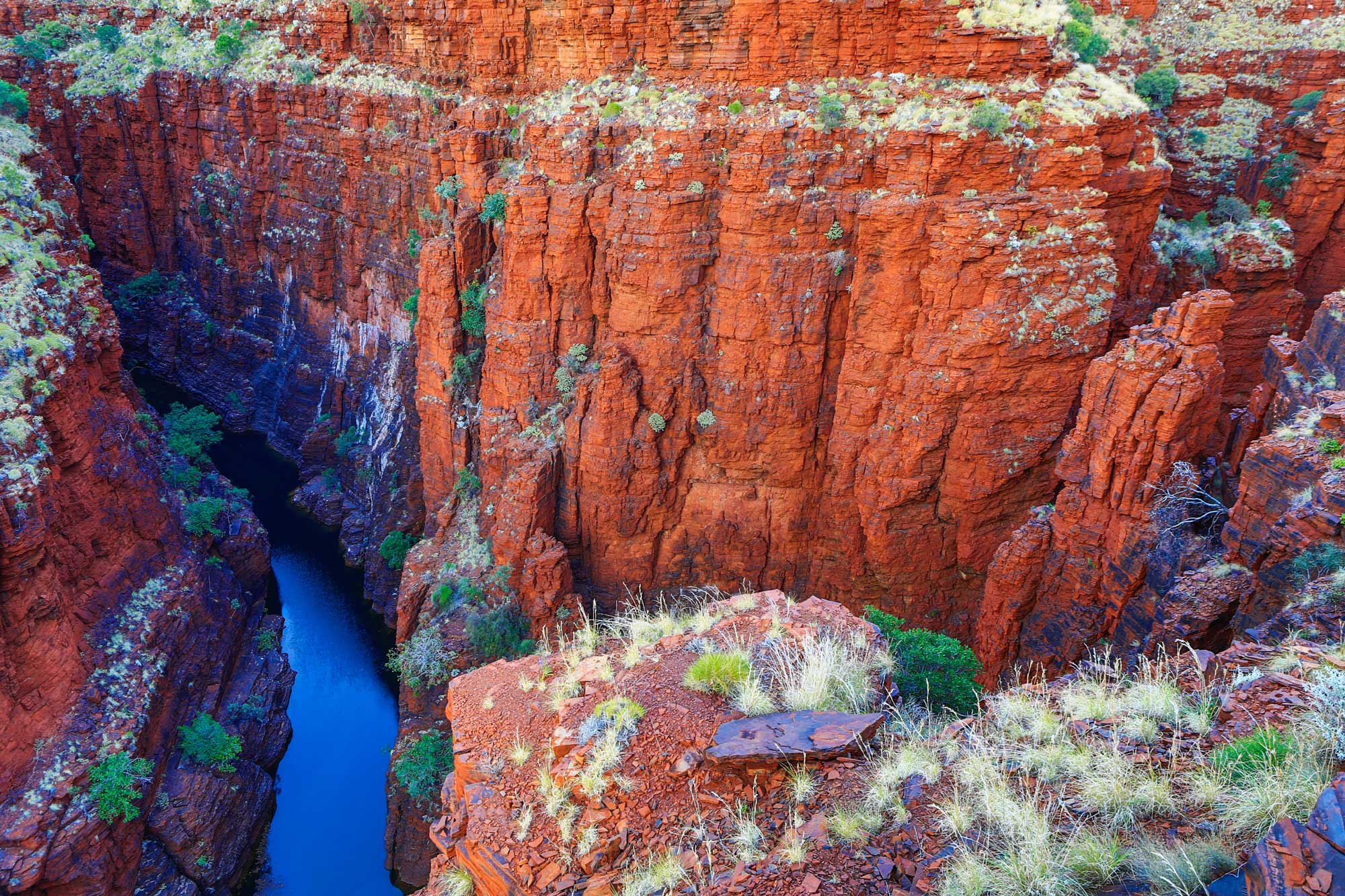